In 2006 I felt drawn to the mathematical beauty of Srichakra in two dimensions. However, I soon got a compelling thought that the regular Srichakra image that we see is actually a “projection” of its 3D version. I worked on that thought. With a lot of calculations and conversions of triangles to pyramids, I succeeded in getting Srichakra in three dimensions. I called it SriChakraSpaceFrameTM(SCSF). Below is my journey through the Srichakra and the article that was published. 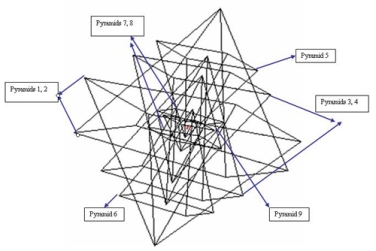 With an unmistakable sense of mystery the Sri Chakra is a strange mixture of the rational and the intuitive. Sri Chakra or Sri Yantra in its basic two-dimensional geometric design is a collection of 9 interconnected triangles in an exacting order. Hindu mystics and believers consider it a sacred design with a great deal of spiritual abundance.

A powerful ‘Energy Grid’ expressed by a geometrical figure as Sri Chakra is a representation of influential deities of the Hindu and Buddhist pantheon. Its interpretation draws profusely from ancient literature and mystic thought. The Sri Chakra had also been mentioned in the Buddhist inscription of the Srividya School in south Sumatra, which is dated seventh century A.D. Therefore, the Sri Chakra already had covered a long path of confirmation as an important article for rituals and meditation. The hymn from Atharva Veda (12th century B.C) is indeed dedicated to the Sri Chakra – the figure composed of nine triangles.

Sri Chakra, or the “Yantra for Creation of Abundance”, is the most revered of all the Hindu Yantras or Mandalas. It is known as the abode of Goddess Sri or Shakti. The mysterious beauty arises from the way that the nine diverse triangles interlink to form a state of perfect balance, beauty and harmony. It is also said to bring into being the harmonizing effect and abundance. It depicts the Yin and Yang principle due to the creation of 43 smaller triangles that characterise the Sri Chakra.

Sri Chakra, as pointed by many scholars and sadhakas, is an accurate mathematical construction on certain principles of the tantric mode. It is a concrete diagrammatic presentation of the body in its various nuances. At the center is the Bindu, the Goddess, and the Devi, who is responsible for Generation, Organisation, and Destruction.

Many of the accurate constructions of Sri Chakras in India are very old. Some are even more complicated than the one shown. There are those that consist of spherical triangles for which the constructor, to achieve perfect intersections and vertices falling on the circumference of the circle enclosing the triangles, would require knowledge of ‘higher mathematics’ which the medieval and ancient mathematicians did not possess. (Kulaichev, 1984, p. 292) Kulaichev goes on to suggest that the achievement of such geometrical constructions in Indian mathematics may indicate ‘the existence of unknown cultural and historical alternatives to mathematical knowledge, e.g. the highly developed tradition of spatial imagination’.

This very ancient symbol made an interesting appearance in modern times as a result of a series of experiments in the field of Cymatics (the study of the interrelationship between energy and matter spearheaded by Dr. Hans Jenny.) The sacred Hindu symbol “Om”, when correctly intoned into the tonoscope (a devise that transforms sounds into their visual representations on a screen), produced a circle which then filled in with concentric squares and triangles, finally producing, as the last traces of the ‘M’ disappear from the screen, the magical figure of Sri Chakra.

The novel approach expressed through this work is that Sri Chakra itself is Abundance. So much secret information becomes available when one tunes into its divine beauty. Especially its relation with the famous mathematical constants Phi and Pi should stir the minds of the scientific community.

There is a fundamental similarity between the realm of mathematics and that of spirituality. There also is a scope for arriving at a syncretic amalgam of the mathematics, philosophy and mysticism. This process of arriving at that confluence ultimately leads one to the denouement of the underlying principle.

Sri Chakra presents that intellectual challenge, a riddle waiting out there to be solved. A novel three-dimensional version of the Sri Chakra was constructed after much thought, effort, intuition and complex mathematical calculations. The ‘Pyramid Sri Chakra’, ‘3D-Sri Chakra’ or ‘Sri Chakra Space FrameTM (SCSF) is a pyramid-based structure. In this 9-pyramid model of ‘3D-Sri Chakra’, the two primary pyramids resemble the Giant Pyramid of Egypt.

The Pyramid itself is an object of adoration and wonder, and a subject of much debate because of the famous Egyptian Pyramids and its known mystical energy field effect.

What more? The two outermost pyramids (pyramids 1 and 2) contribute to 10 projected pyramids. If embedded in a sphere, the vertices of these 10 projected pyramids touch the sphere surface. It means this structure is spherical. This fact drives one to seek deeper meaning of the Geo-Pyramid theory.

I have worked on couple of more Chakras and sharing the details below.

Represented in 2D (as known) and in 3D as designed by me in a pyramidal form and its video. 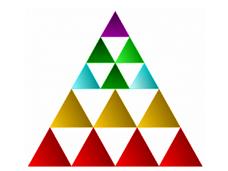 This is work in progress as the geometry is complicated. 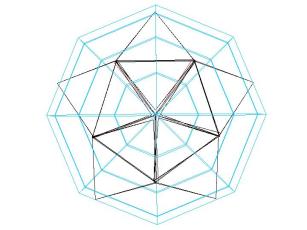 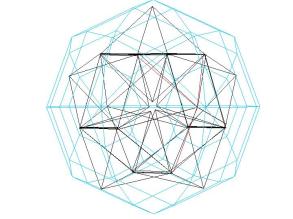