Let’s explore some science thoughts and experiments in our everyday lives.

Angle of Minimum Deviation Calculations for a prism with Refractive index 1.5

What Is Atmospheric Pressure?

Atmospheric pressure is the pressure exerted by the weight of air in the atmosphere of Earth (or that of another planet) above the measurement point.

How Is Atmospheric Pressure Measured?

For a long time, atmospheric pressure was measured by a mercury barometer which was invented in 1643 by one of Galileo’s assistants. The way it works is that the atmosphere pushes downward on the mercury. This type of instrument can be used in a lab but is not easy to move! Measurements from a mercury barometer are usually made in millimeters of Mercury (mm Hg).

However, an aneroid barometer can be used in place of a mercury barometer; it is easier to move and is often easier to read.

Getting your hands on a mercury barometer or an aneroid barometer can by cumbersome. But can we measure atmospheric pressure with easily available everyday objects?

Hmm! Let’s see how we can do that.

Now, we know that pressure is force acting upon a unit area.

And atmospheric pressure force from the column of air acting upon the unit area.

Atmospheric Pressure = [Force (due to the air column)] / [Unit Area] 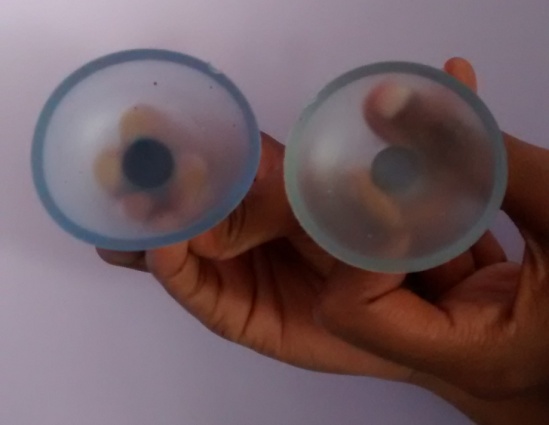 If you have two vacuum fixtures, press them together so that take the air between them is completely out. Now, due to the vacuum between the fixtures, even if you pull them hard, you shouldn’t be able to remove them. This is because the force of air column is acting on them in opposite directions.

Experimentally, you have the force, and the area is observed. We know that the Gravitational Acceleration is 9.8 m/s^2.

The value is very close to the actual atmospheric pressure and is within the measurement error!

(All hands-on science models used here for experimentation are simple DIY school science projects. However, science does not stop there. There always is a potential for looking far beyond high-school science ).

The AC generator is one of the most ingenious projects in Physics and should be done by every student and teacher. It explains 1) Fleming’s Right Hand Rule, 2) Lenz’s law, 3) Alternating Current, 4) Rectification using Diodes and 5) ultimately – even the DC generation. I call it the ‘One-in-All’ project for electricity, electromagnetism and electromagnetic induction.